The Flat White has appeared on menus of specialty coffee houses for many years. Despite not achieving quite the popularity of lattes and cappuccinos, the flat white is still a staple in most baristas repertoires.

Combining coffee and milk like many other popular caffeinated beverages, the flat white still stands on its own ground and is, for many, their preferred morning beverage.

But if you’re confused to exactly what it is. Not to worry. In this quick review, we explain what is a flat white, the history of this beverage, variations and types of flat whites, a recipe on how to make one and much more. Read on to learn all about what makes this drink special.

What is a Flat White: The Beverage Explained

The flat white is a coffee-based beverage that contains both espresso and microfoam, which is milk that has been steamed to achieve a velvety consistency with the tiny bubbles created. The size of the layer of foam can vary a bit, depending on region or the individual barista.

However, a key to distinguishing this espresso brewed beverage is the consistent dark brown color that tops off this drink, as the microfoam is carefully poured into the meniscus of the drink.

The name ‘flat white’ is in reference to the thin layer of velvet-like foam which tops this espresso drink. This thin layer is the ‘flat’ in the flat white. To increase the thickness of this important layer, it is often preferred to let the flat white sit to add additional texture to the drink. This will also provide distinct sip rings in the cup as the flat white is enjoyed.

Although, it has not been confirmed when the very first reference to a flat white was, as we know the beverage today, there was a reference to a “flat white coffee” in Danger by My Side, a British film from 1962. Later, during a mid-1970s episode of The Young Doctors, an Australian soap opera, a character in a restaurant ordered two ‘flat whites.’

Either of these references may or may not have described the flat white we are familiar with in the twenty-first century. Nonetheless, in 1985, Alan Preston added the flat white to the permanent menu of the Moors Espresso Bar in Sydney, Australia. He stated the idea came to him from his native Queensland, where a common drink choice in the 1960s and 1970s was a “white coffee – flat.”

Overall, the origin of the flat white is not entirely clear, but it’s evident that it has been around since at least the 1980s, if not earlier.

While the flat white overall is a fairly standard espresso beverage, there can be some variation depending on the region, the coffee shop, or the barista. For example, a flat white typically will have a rather small amount of microfoam, even as little as 0.5-1 cm. But that can vary from coffee shop to coffee shop.

Flat whites are commonly served in a small mug, typically in a glass with one or two shots of espresso. The size of the drink can vary from 180mL to 200mL.

One of the biggest distinguishers of the flat white, perhaps, is the ability for baristas to apply ‘latte’ art to the drink. The combination of a very small amount of foam and more espresso make the drink the perfect canvas for creating latte art as the contrast between the espresso and steamed milk is even more distinguishable than in a standard latte.

All of these beverages share in common espresso, steamed milk and foam. However…

A flat white and a white coffee are often mistakenly used interchangeably. While sometimes, a white coffee is used by a coffee drinker to refer to ordering a coffee with milk, the term white coffee actually refers to type of coffee roast type.

How to Make a Flat White

Here’s a simple guide for how to make a flat white:

What is a Flat White at Starbucks?

At Starbucks, their flat white is made using ristretto espresso, with an extra shot added. Ristretto shots use the same amount of ground espresso beans but less water, making for a more concentrated and more richly flavored shot of espresso.

How Many Calories are in a Flat White?

A traditional flat white, made with two shots of espresso and two parts steamed milk, has approximately 120 calories. However, the calorie count in this beverage can, of course, vary depending on the overall size of the beverage, the type of milk used, and the addition of any sweeteners.

Want to sip on more coffee drink types? Check these out!

How to Make a Flat White (4 Steps) 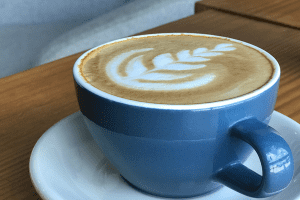 So what is a flat white really? It's a coffee beverage consisting of espresso, steamed milk, and typically a thin layer of microfoam served in a small mug.

Recipe Instructions: 1) Pull a double shot of espresso into a glass or cup. 2) Steam your pitcher of milk to 130-145 degrees Fahrenheit. 3) Give the pitcher a tap down on the counter to make the milk smooth and velvety and disperse any large bubbles. Swirl the milk around lightly. 4) Carefully pour the milk into the espresso, making a latte art pattern, if desired, on the surface of the flat white.