Lattes are one of the most popular coffee drinks consumed around the world today, especially in the United States. This coffee and milk based beverage is a go-to for many every morning and a popular choice as an afternoon pick-me-up.

Along with drip coffee, iced coffee, espresso, and cappuccinos, lattes are one of the top choices for coffee lovers. Whether you’re a latte drinker yourself or simply curious about why this beverage is so popular, we have all you need to know.

In this quick guide, we explain what is a latte, the history of this popular drink, different types of lattes, how to make a latte, and more, below.

What is a Latte: The Coffee Drink Explained

A latte, also called a caffe latte, is a coffee brew beverage that combines espresso with steamed milk. The beverage usually features a single or double shot of espresso, which makes up about one-third of the beverage. The other two-thirds of the drink is made up of steamed milk, with a small layer of frothed milk (approximately one half inch thick).

History of Lattes: How It All Began

Since at least the seventeenth century, Italian coffee-drinkers and other Europeans have been enjoying coffee with milk. However, the term caffe e latte was first used in English in the late nineteenth century. During this time, coffee started to increase in popularity worldwide, however espresso brewing machines were not yet created.

It was in 1884 when the first patented espresso machine was developed, but the machine wasn’t really perfected until the 1940s. At this time, the spring-piston lever was added so a barista could “pull a shot” of espresso.

Steam wands were first added to espresso machines in 1903. But it wasn’t until the 1980s in America when the caffe latte was first created as we know it. Baristas in Seattle, Washington began to develop the skills to create lattes as we are familiar with them today. They used highly textured milk to create the ‘latte art’ we commonly see on top of the popular beverage. Today, many baristas finish every single latte they create with a touch of ‘latte art.’

Traditional lattes, as they are most commonly known, are made of espresso and steamed dairy milk. However, there are many variations in today’s world. Variants include adding sauce or syrup to flavor or sweeten the beverage.

Additionally, latte recipes can also be made with alternatives to dairy milk. Some of the most popular options include:

These are excellent choices for those who are lactose-intolerant or follow a vegan diet.

Tea Lattes: An Alternative to Coffee

For those who do not drink coffee, tea lattes offer a popular alternative beverage recipe to try out. Popular options include:

Other choices include turmeric tea, mate, or even mushrooms. These options will still have the usual ratio of one-third of the base, with two-thirds steamed milk.

In addition to lattes, there are several other popular milk and coffee beans based beverages.

There are numerous other coffee-based drinks that contain a combination of both espresso or brewed coffee and milk, but the latte remains as one of the most popular beverages in this category.

Both some of the most popular coffee-based beverages in the world, lattes and cappuccinos and often get confused with each other. Both are fairly similar, but there are some distinct differences to learn between the two espresso drinks.

A latte, as you now know, contains approximately one-third espresso and two-thirds steamed milk, along with about a half inch of milk foam.

On the other hand, a cappuccino is made up of approximately one-third espresso, one-third steamed milk, and one-third frothed milk or foamed milk.

The key difference between a latte and a cappuccino is the amount of steamed milk versus foam. However, it’s also interesting to note that while the cappuccino originated in Italy, the latte was first created in the United States.

How to Make a Latte

Here’s a simple and easy guide and recipe for how to make a latte:

Latte art is the design that a barista creates on the top of a latte, created by skillfully pouring the steamed milk into the beverage to make a pattern or design.

The most popular kind of latte art is free-pour. It’s created by the barista carefully pouring the creamy microfoam into the drink using the height and angle of the pour to skillfully craft the desired pattern.

Some popular latte art designs include the rosetta, heart, or tulip. More elaborately crafted designs are also possible using the free-poured method, but you will most often see the most popular and simple designs at your local coffee shop.

To create more elaborate latte art, a barista could use additional techniques, as well as various utensils. The barista can then etch into the drink and manipulate the coffee and layer foam, or utilize syrup, to create a more intricate design. A barista can also use extra foam to sculpt shapes to create 3-dimensional latte art. Flavored syrup or powders can also be used to detail the designs.

There are many different methods and variations for making and serving lattes. Here are some you might come across:

It is increasingly popular, especially in the United States, for flavorings to be added to lattes to suit the taste of the drinker. Both sweetened and sugar-free syrups are common additions. Popular flavors include chocolate (for a mocha latte), vanilla, caramel, and hazelnut. Some latte drinkers even prefer a combination of flavors, such as a delicious peppermint mocha latte.

Best Time to Enjoy a Latte

Traditionally, coffee-based beverages, including lattes, are often considered a morning beverage. People around the world often choose lattes to kickstart their morning shortly after waking up or after having breakfast. A hot latte can provide a warming boost of energy to get your day going.

However, a latte may also be enjoyed as a nice afternoon treat. After a busy day of work, errands, chores, or schoolwork, many coffee-drinkers like to enjoy a latte as something to look forward to in the later part of the day and to give some additional energy to complete the rest of the day’s deeds.

For more quick, but in-depth guides on different coffee drinks, check these out!

What is a Latte? A Beginners Quick Guide to Milky Espressos 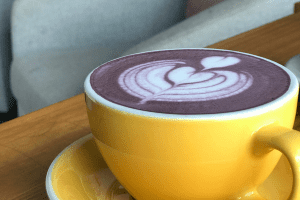 Confused about what is a latte? A latte is coffee beverage that combines one third espresso with two thirds steamed milk and a small layer of frothed milk on top. Heres how to make a latte in 9 simple steps.

Recipe Instructions: Pull 1 or 2 shots of espresso into a small glass. Fill your steaming pitcher with milk until the milk hits the lower nudge of the spout. Clear your steam wand, place the nozzle just below the surface of the milk and turn the steam wand on. Keep the nozzle just below the surface for about 5 seconds to create microfoam. Submerge the steam wand nozzle another fraction below the milk and slightly off-center of the middle to continue to spin the milk until it becomes 120-140 degrees Fahrenheit. Turn off the steam wand and wipe with a clean, wet cloth. Pour the espresso shots into your latte cup. Carefully pour the milk near the center of the espresso, holding back the froth  until the cup is filled approximately 1 inch from the top. Top the drink off with a thin layer of microfoam. If desired, this is the step where you can add latte art as a finishing touch.