Coffee is one of the most popular drinks in the world, and of the numerous coffee-based beverages, cappuccinos are a very common favorite. The combination of coffee and milk is a harmonious blend that many individuals savor daily, and the cappuccino is one beverage that deliciously melds these two together.

Along with the latte, the cappuccino is one of the most well-known of all coffee and milk creations, but exactly what is a cappuccino? How did it come about?

Read on to discover not only what a cappuccino is, but the history of this popular beverage, different types of cappuccinos, how to make a cappuccino yourself, and much more.

What is a Cappuccino: The Drink Explained

The drink actually varies quite a bit depending where it is made. For example, in Italy, the cappuccino is typically no larger than six ounces with the milk portion being made up of half steamed milk and half milk foam.

However, in the United States and other areas around the world, the cappuccino is often available in many sizes larger than six ounces. One detail remains, though: The drink always maintains a thick layer of milk foam.

Over the years, the cappuccino has also evolved to include a much creamier microfoam, as opposed to the very airy, yet stiff foam that used to be used. The microfoam picks up the espresso crema quite beautifully and offers a silky smooth taste for the palate.

History of Cappuccinos: The Very Beginning

In the 1700s, adding milk to coffee was already a choice of some Europeans, and during this decade, the cappuccino also originated. Coffee houses in Vienna, Austria offered the kapuziner, which was described as coffee, sugar, and cream, sometimes with the addition of spices.

The name kapuziner came from the color of the coffee when drops of cream were added. The nickname comes from the Capuchin monks in Vienna and other areas who wore robes of a similar shade.

The cappuccino, as we now know it, was first mentioned in the 1930s in northern Italy. Photographs from that period show the cappuccino as a coffee drink with whipped cream and a sprinkling of chocolate or cinnamon. However, the beverage evolved over time, where steamed milk became an addition.

In the United States, the popularity of cappuccinos, in addition to espresso itself, spread throughout Italian neighborhoods, including North Beach in San Francisco, Little Italy in New York, and North End in Boston. Cafes in these neighborhoods still often serve the cappuccino in a similar way to the Italian preparation that has stood fairly strong since the 1950s.

Variations and Types of Cappuccinos

Cappuccino recipes vary quite a bit around the world. Although the most common type of cappuccino includes 1 part espresso combined with one part steamed milk and one part milk foam, the drink can also vary in the ratio of milk to milk foam depending on the cafe or barista.

In addition to different ratios of milk and foam to the espresso, some variations that offer a more significant change to the standard cappuccino also exist. For example, the kapuziner, as mentioned earlier, is still a choice at many Austrian coffee shops and contains coffee, along with whipped cream, sugar, and spices, such as cinnamon.

Adding spices to cappuccino orders is also very common in some coffee shops. In many European countries, adding cinnamon is a popular choice, while in the Middle East, the addition of clove or cardamom is quite common.

In Brazil, a top coffee-producing country, the Brazilian cappuccino is a menu option. This drink typically includes the addition of cinnamon or cacao powder to the cappuccino.

While in the state of Minas Gerais in Southeastern Brazil, the cappuccino mineiro is a popular option, which includes dulce de leche (or doce de leite in Portuguese) as a replacement for milk. This thick milk jam, or caramelized milk is prepared by slowly heating milk and sugar for several hours.

Still yet, an iced cappuccino, which typically resembles the standard recipe but is served over ice, is a popular variation for those who enjoy a cold coffee-based beverage.

How to Make a Cappuccino

Here’s a simple recipe for how to make a cappuccino:

A cappuccino, latte, macchiato, and flat white all contain both espresso and milk, but each drink is unique:

Is a Cappuccino Healthier than Coffee?

If you’re looking to reduce your calories, coffee on its own is going to be a much better option. Drip coffee only has about 2 calories per eight ounces. However, adding milk, sweetener, or other ingredients can increase the amount of calories, fat, and sugar in your coffee beverage.

Cappuccinos, however, are always going to contain more calories than a plain cup of black coffee. In a standard cappuccino, there is approximately 110 calories and 6 grams of fat.

Is a Cappuccino Stronger than Coffee?

A cappuccino has a less strong flavor than coffee, as the addition of milk helps to cut the acidity and bitterness of the espresso. While espresso on its own has an intense flavor and more caffeine, the milk in a cappuccino dilutes the espresso and gives it a milder taste for the palate overall.

Want to sip on more coffee drink types? Check these out!

How to Make a Cappuccino (8 Steps) 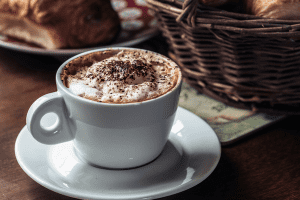 Confused about what is a cappuccino? A cappuccino is a coffee beverage that traditionally combines equal parts of espresso, steamed milk and milk foam. Heres how to make a cappuccino in 8 simple steps.